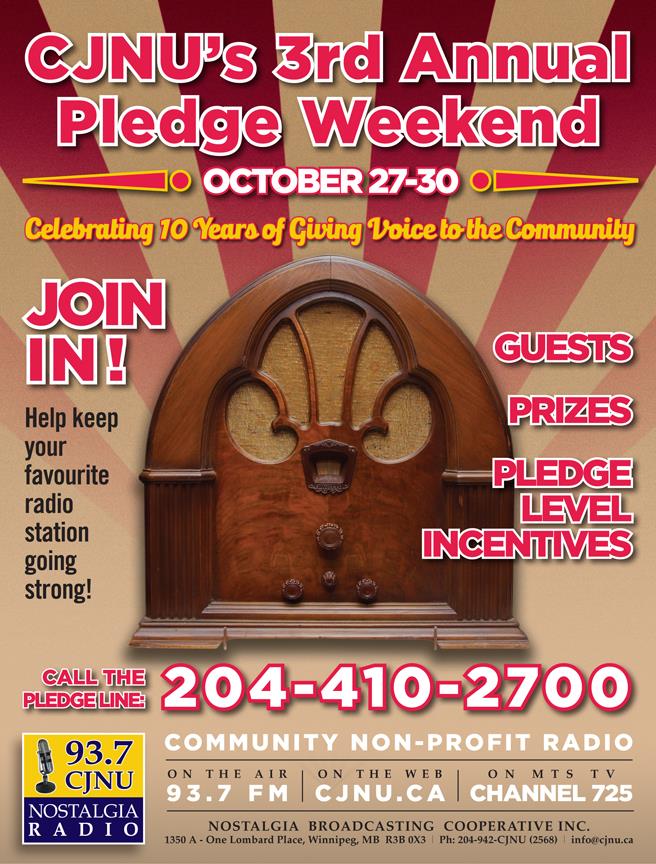 CJNU Annual Pledge Weekend – Over the Top and then some! Exceeds “ultimate” goal of $30,000.
CJNU members and supporters continue to generously back CJNU Community Radio every step of the way with a record number of pledges to the 3rd Annual Pledge Weekend held over four days, ending October 30th. A record 362 supporters made pledges of $33,370. That’s another huge jump over the 2nd Pledge Weekend in 2016 when 238 supporters pledged $22,433. That’s a 45% increase in dollars and 50% increase in number of pledges. This year’s numbers more than double the first weekend pledge drive only two years ago in 2015 when CJNU’s supporters contributed $14,955. As well, we have several new members to add to the 1200 plus annual dues paying members of Nostalgia Broadcasting Cooperative.

Several factors are believed to have contributed to the increase. There were matching funds for the first $5,000 of donations provided by James Richardson and Company and other CJNU supporters. During the four day live broadcast, CJNU ‘on air” personalities interviewed 35 prominent community leaders, all of whom underscored the value of an independent, community station. Numerous public minded companies provided incentives for pledge commitments. Others helped with organizational costs and services. Listeners and supporters also tell CJNU they appreciate the Pledge Weekend being stage over a four day period in contrast to the one or two week pledge drives by other public broadcasters.

And it wasn’t all one way. Larry McIntosh and Peak of Market committed 25 pounds of potatoes for Winnipeg Harvest for each of the first 200 pledges. That’s 5,000 pounds in all and the full amount of that commitment is on its way to Winnipeg Harvest. As you supported CJNU, Peak of the Market supported Winnipeg Harvest. Win, win, win all around!

This year’s “on air” highlight was the concluding two hour broadcast, 6 to 8pm Sunday with hosts Adam Glynn, Frank Stecky & Larry Updike. Pledges of $1,000 were received in that broadcast time alone, officially taking us over the top. Another $2,000 and counting has been received since the conclusion of the broadcast.

Although CJNU is mainly volunteer run, costs of a full time licensed station are substantial and the annual pledge Weekend provides about 10% of our annual operating costs. The money helps us meet operating costs of a licensed community non-profit station that operates 24/7, 365 days a year with limited commercials – often less than 1/3 of the advertising carried by commercial stations. And again this year, we are designating a portion of the proceeds to a “rainy day” fund to cover unexpected operating costs and future needs. We all want to be certain that CJNU can continue its programming and service to the community for many years to come.

We also thank CJNU listeners and supporters who show their support the other 361 days of the year, through donations, annual membership fees, as advertisers and host sponsors and community sponsors. Financial support and memberships can be transacted through this website using a credit card all year ‘round, any hour of the day. For your convenience, you can make your contribution in a single payment or by monthly payments. Or telephone the station at 204-942-2568. Or you can always send us a cheque by mail to CJNU, 1350A – 1 Lombard Place, Winnipeg R3B 0X3.