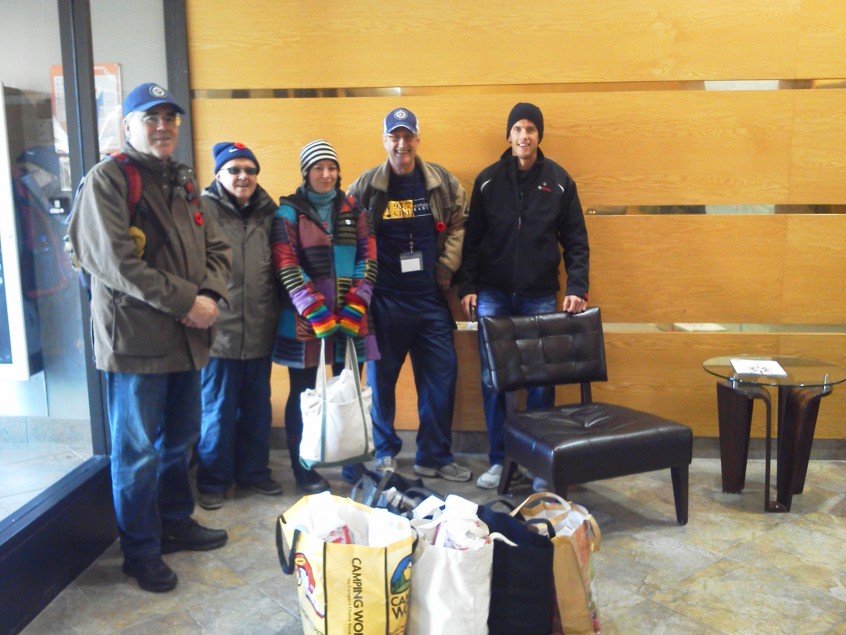 During CJNU’s annual Pledge Drive October 23-25th, I (Ross Thompson) was on air with CJNU personalities Don Milne, Chadd Cawson and Dorothy Dobbie. In a weak moment I made a challenge and pledge. “If we raise over $500 during my guest host shift I will walk down Portage Avenue handing out CJNU information”, I promised, qualifying that it would involve walking from Portage and Main to the west perimeter. Previously, one announcer aired, “Awesome! All the way to Vancouver?” In a two hour period over $1200 came in. Gulp!

My Wife Lynne suggested we multi-task the perambulation on Portage by collecting items to hand out to the less fortunate encountered en route. Well, from this point on, things snowballed quickly!

Five volunteers stepped up to step out on November 7th, and the response from individuals and businesses was overwhelming! Pure cash from supporters totalled over $250, and business ventures like the Red Apple Store in Stonewall, the Winnipeg Goldeyes and Victoria Inn, donated several items for the “We-Care” bags.

In short order we had 22 bags to hand out, each with a value of over $20! Items included scarves; gloves; toques; washcloths; juice; toothpaste; gum; soap; shampoo; conditioner; tissues; cleansing wipes; combs; energy bars; chocolate; handkerchiefs; socks; neck warmers; and lip balm. One woman drove to Stonewall, and donated 18 individually packaged gift bags-soap and washcloths from her boutique. She told me the best way to lift her spirits is to extend help to others, donating “What I can”. She said she would join the walk next year and “Let’s get 100 bags!!” Gulp again…

It was a bonus day for early November, with a high of 5 degrees C, and a cooling breeze from the southwest. Christie Donaldson, CJNU’s Creative & Production Coordinator suggested we deviate from our route plan, venturing north and east to Higgins Avenue, instead of immediately heading west on Portage. In less than 1 hour, we were out of bags, good news for the “project”, but bad news that there is so much need in downtown Winnipeg and elsewhere. I am sure this added at least 3 miles to our 10 mile journey, but it was worth it.

In all cases, we were genuinely thanked, and it was very touching to see the recipients peering into the packed bags to see what we hoped were treasures for them. “It reminded me of Christmas stockings”, one volunteer noted. Along the way, CJNU got some profile as well- everything from cars honking in support, to “Who ARE you guys?” asked from passers-by. I stopped in at Hull’s book store on Portage to hand out CJNU Bookmarks. “Thank YOU. I listen to your station all the time”, the Manager said. (Note to self: Visit again with a CJNU Membership Application!)

Charles Dickens: “No one is useless in this world who lightens the burdens of another”. As we dispensed bags, physically it lightened our load, at the same time hopefully lightening the loads of those less fortunate.

With much support and good wishes from everyone aware of CJNU’s outreach, and the good feelings experienced by this year’s trekkers,(in spite of sore muscles and shin splints), we can easily double next year’s efforts if they are needed. To quote Martin Luther King as sung by Elvis, “If I can dream…” 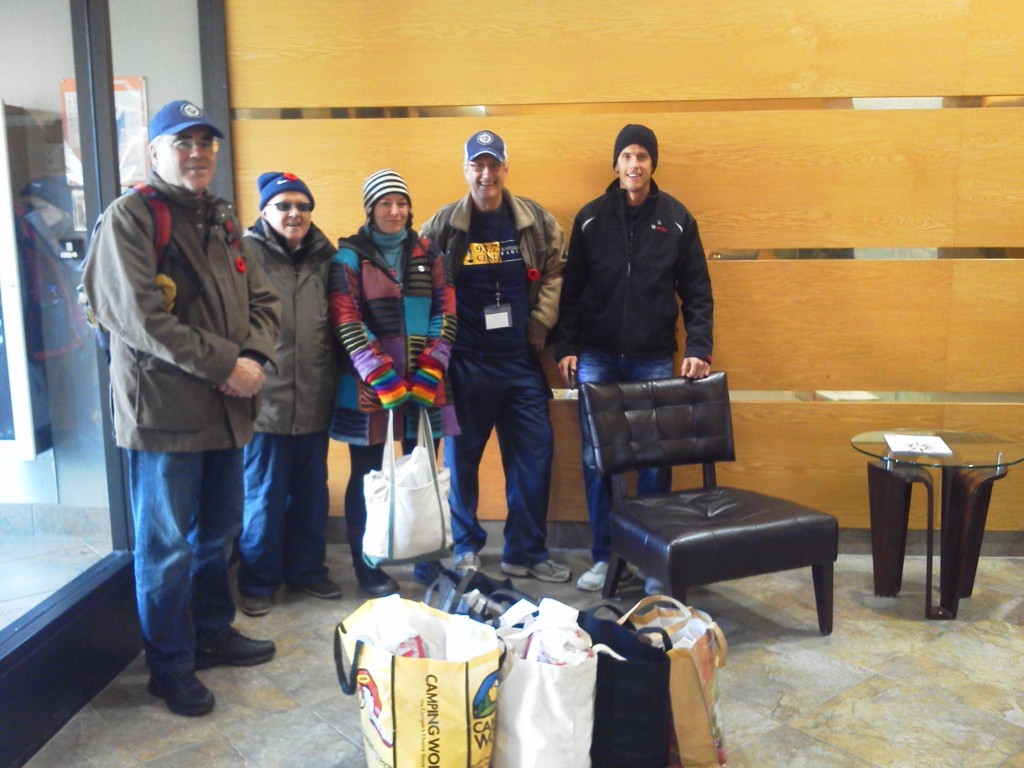