THE BEST IS YET TO COME

It's the one time each year that we unashamedly and unabashedly say - WE NEED YOUR HELP - now, more than ever.

HOW CAN I MAKE A PLEDGE?

Just because the Pledge Weekend is over, that doesn't mean you can't still make your pledge! Any pledge of any amount received before midnight, November 15th 2021 will be give you an entry in our Grand Prize Draw - and all of this year's gifts and incentives remain available until November 15th, too!

You can make a pledge to CJNU...

We need your help

For four days annually at the end of October, we throw a party on the radio - celebrating everything CJNU is, and does. As we play the greatest nostalgic music ever recorded (from the past century and beyond!) and shine a light on the good news stories happening in our city and province, we ask you: if you enjoy what CJNU does through the year, please consider making a contribution during our Pledge Drive.

As a non-profit community radio station, we rely hugely on the direct support of our listeners. Unlike PBS in the US, we don't receive any kind of regular government funding.

But we're not just putting our hands out - as a co-op we believe that if you support us, we should be supporting you, and our community too - and that's why we offer you some great prizes and incentives in return!

We also have an EXCLUSIVE GIFT if you choose to donate the magic amount of $93.70

Any pledge of ANY amount received at any time before midnight on November 15th 2021 will be entered into our Grand Prize Draw to win one of several prize packages!

Any pledge of ANY amount received before midnight on October 20th 2021 has been entered into our Early-Bird Draw for a chance to win great prize packages!

Any pledge of ANY amount received during each of the four days during our live Pledge Drive has been entered into the daily prize draw for that day!

In gratitude for their support of CJNU

And for the generosity of our volunteers

When will I receive my incentives/prizes/gift?

What if I don't want any of the incentives/prizes?

I'm already a member of CJNU. Does that count toward Pledge Drive?

Do I receive a tax receipt for my pledge?

How will the money be used?

On behalf of all of us at CJNU, THANK YOU for your support! 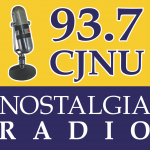