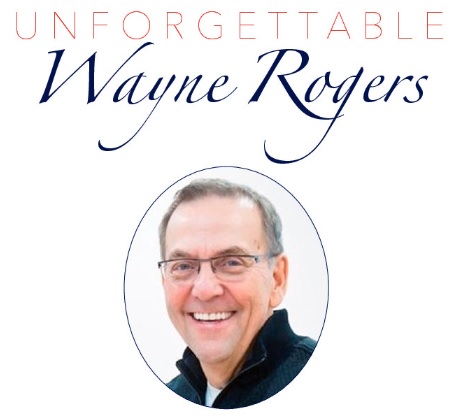 Our profuse thanks to all those involved in the production of our special broadcast Unforgettable: Remembering Wayne Rogers, which aired live on June 22nd, 2020 – sharing music and memories. If you missed all or part of the programme, click here to listen again. CJNU is very proud to have had the opportunity to recognize Wayne’s almost immeasurable positive impact on our community, and in particular to highlight two of the other great causes that meant so much to Wayne – Variety, the Children’s Charity of Manitoba and The Reh-Fit Centre Foundation.

We would like to acknowledge all those who made a contribution to the station in Wayne’s memory:

“Busier than a one-armed paper-hanger!”

And Wayne – thank you for always being ‘you’. Love you lots. Say ‘hi’ to Elvis for us 😉

Below is Wayne’s obituary, as written by his wife, Susan, and originally published in the Winnipeg Free Press.

On Thursday, April 23, 2020, after a short battle with cancer, the world lost one of its shining stars and I lost my husband, my best friend, and the love of my life.

Wayne is survived by me, Susan Stobart, his daughter Jennifer Rogers, five grandchildren, “mumsie” Irene, and all the Stobart family. He was predeceased by his son Allan in 2002.

It is a cruel time we live in right now with COVID-19 when the person who loved people more than anyone else I know, was denied the ability to have me or anyone else he loved by his side during his last three lucid days. Video chatting is just not the same as being with your loved one in person, to hold their hand and reassure them that everything will be ok. Thankfully, however, I was allowed to be by Wayne’s side during his final few hours.

The night we met 29 years ago there was an instant recognition for both of us that our hearts and souls had found a home. That night, he made me laugh – something I hadn’t done in a long time – and we continued finding things to laugh about every day right to the end.

Wayne lived a life of service to others. He had a huge capacity to love and give of himself – more so than anyone else I have ever met. It was just part of his DNA that this wonderful man always instinctively knew when someone needed a lift…when someone needed a smile…when someone needed help. And Wayne never missed an opportunity to accommodate the need. He never forgot someone’s name – and if you told him something about yourself, he never forgot. No one could work a room like Wayne but still leave you feeling like you were the most important person in the room. He was a man who would not tolerate negativity, would not accept defeat, and never wavered in his optimism and unconditional belief in the goodness of humanity. Wayne did not see the glass as being “half full” – he always saw the glass overflowing.

Wayne graduated from Elmwood High and enjoyed going back to the reunions with his buddy Roy. He followed several career paths during his lifetime including being a counsellor at Stony Mountain Institution, being part of the early years of Main Street Project, and working for the family flower business. Ultimately, however, Wayne’s path brought him to his destiny – Variety, the Children’s Charity of Manitoba where he started out as a volunteer and ultimately became its Executive Director. This was not a job to Wayne – it was a calling. Imagine being able to dedicate every day to helping children! Whatever a child needed, Wayne seemed to find a way to make it happen. He built relationships with many in Winnipeg’s business community, making it impossible for them to not see and feel his passion about “the kids”. Wayne was never shy about asking “nicely” for their help but also never forgot to express his gratitude for whatever help they could give. Even after retiring from Variety in 2014, Wayne maintained contact with many of his Variety kids.

Wayne never really fully retired. The day after he left Variety I came home from work and asked him how his day had gone. His reply was “I’ve ironed six shirts and four pairs of pants and decided retirement is not for me”. And so he chose to continue to live his life of service by helping other not-for-profits wherever and however he could. Right up until his passing he proudly sat on the boards of CJNU – Winnipeg’s nostalgia radio station and the Reh-Fit Foundation.

After enduring a long but thankfully successful battle with cancer in 2008, Wayne and I decided “tomorrow is promised to nobody” and we started enjoying extensive travel all over the world – mostly with a small group of friends and family who shared our sense of adventure. We created very special memories as well in Jersey (Channel Islands) visiting our special friends there. What fantastic memories to have! I am so glad we had the unexpected opportunity to travel to Tofino last November with two good friends. So much joy and laughter exploring Canada’s beautiful west coast…who knew it would be our last big adventure together. And wherever we went in the world, there was no bigger ambassador for Canada and Winnipeg than Wayne! One had only to ask “where are you from” and Wayne would eagerly start educating the person about everything they should know about our beautiful country and city.

For many years we winter vacationed in Mexico but in 2015 decided to start enjoying the month of March in Palm Springs. Returning to the same place each year, we established friendships with the people who shared the same “green space” and it was like “going home” each year. Palm Springs allowed us to enjoy two other passions – golfing and hiking.

What travel taught us is that no matter where you go in the world – no matter what the culture – no matter what the economic opportunities – people are fundamentally all the same and want the same things from life… the dignity of being able to work and support our families and the desire to create a better life for our children.

Wayne loved his music. Although he enjoyed all forms of music, the 1950s and 1960s were his favourite eras and of course, no one could know Wayne without knowing his passion for Elvis. He would have a captive audience every time he shared his Elvis stories – particularly the times he met Elvis – and although I must have heard those stories a million times, they never got old!

As much as many of us feel Wayne’s work here on earth wasn’t done, apparently there was a bigger plan for him and he’s been called to serve elsewhere. No doubt everyone already knows him – and no doubt he is already helping children.

Wayne packed more into a lifetime than might seem possible and should be so very proud of the legacy he leaves behind. For those of us left behind, how can we honour Wayne’s memory and ensure his legacy continues? Let’s all try to make the world a tiny bit better every day by looking a bit harder for opportunities to be kind to a stranger, smile at someone who looks like the world has passed them by, be there for someone in need.

I will miss you Wayne with all my heart and soul. No one could ever have loved me as much as you did. And you could never have been loved by anyone as much as I loved you. How lucky were we to share 29 years of love, life, and joy together? I had hoped it would be longer but am grateful for what we were given. The colour has gone out of my world right now, but I will do you proud by being positive, not accepting defeat and carrying on your unconditional belief in the goodness of humanity. I will miss handing you Kleenex as you cried during romantic or sad movies. And as in the words of Nat King Cole who sang our song, you will always be “Unforgettable” to me.

Wayne was blessed with a huge community of friends. He loved and appreciated each and every one of you and we will be forever grateful for all of your love and support.

Sincere thanks and gratitude to Wayne’s doctors – Dr. Stephen Coyle for his “24/7” access and compassion over the course of Wayne’s illness and to Dr. Ahmet Leylek and his assistant Danielle for their caring of Wayne over the years and, most recently, their efforts to get testing done. A special thanks as well, to the ICU unit at Health Sciences Centre for their respect, caring and compassion to both Wayne and I.

We hope to have a Celebration of Life for Wayne in the near future when we can gather together again and share some hugs. In the meantime, please share your stories and pictures on the Neil Bardal Funeral Centre website.